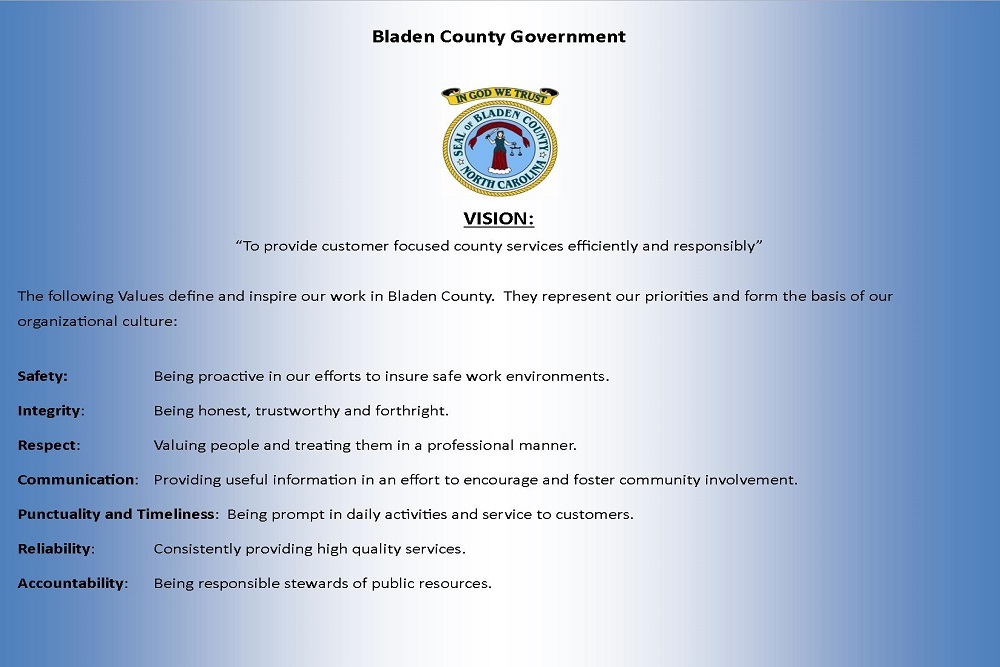 Welcome to Bladen County.  We are located in southeastern North Carolina in what is known as the Coastal Plains.

Bladen County was first settled by Highland Scots who came to the Cape Fear Valley in 1734 seeking religious freedom. Once North Carolina's largest county, Bladen received its name, "Mother of Counties," because fifty-five counties have been carved from it. It now contains some 879 square miles and is the fourth largest county in the state. Originally, Bladen contained over 1,000 lakes and was the state's most beautiful county. The lakes, believed to have been created by a bombardment of meteors 100,000 years ago, have developed into important recreational areas and tourist attractions. Within its present boundaries, seven of them remain.

Being fairly close to the Atlantic Ocean, Bladen's climate is influenced to some degree by maritime conditions in its southeastern portions. Temperatures in Bladen may reach 105ºF in summer and dip as low as 10ºF in winter. Such periods of extreme temperatures are of short duration, usually with several years elapsing before recurrences. The average yearly temperature is 63ºF and the average yearly precipitation is 49.06 inches.

Bladen County is abundant in natural recreation areas. There are three rivers within its boundaries, with the Cape Fear River, the largest, bisecting the county. Fishing is reported to be excellent throughout the county. Good hunting is generally limited to squirrel and deer. White Lake is commercially developed and attracts thousands of visitors annually. Bay Tree Lake is a growing private resort development. Jones and Singletary Lakes are state owned parks. The climate is good for outdoor recreation with nine months of moderate weather per year.

Bladen County is a county on the move, but you'll still find "down home" folks with a focus on the future. A strong work ethic and high productivity, which resulted from the agricultural heritage of the people of Bladen County, have helped make success stories for over 40 existing industries. Bladen County is very fortunate to have diversity of industries offering employment opportunities in food processing, manufacturing and assembly, textiles, chemicals and agri-business. There is an abundant available labor supply and workforce training is available at Bladen Community College for new and expanding industries.

In compliance with the Immigration Reform and Control Act of 1986, Bladen County will employ only those individuals who are U.S. Citizens or legal aliens authorized to maintain employment in the United States.BLADEN COUNTY IS AN EQUAL OPPORTUNITY/AFFIRMATIVE ACTION EMPLOYER

Want to get notified whenever we write about Bladen County ?

Sign-up Next time we write about Bladen County, we'll email you a link to the story. You may edit your settings or unsubscribe at any time.